Living in Northern Michigan, you don’t get to see the sunshine very often.  In the part of North-West Michigan we are in, we get lake effect snow added to other systems, at least until the Great Lakes freeze over.  Today was a rare; sun for a little while.  It’s no surprise that many in this area are Vitamin D deficient due to the lack of sunshine, so we made sure to get out at least for a little  bit and enjoy the sunshine today. 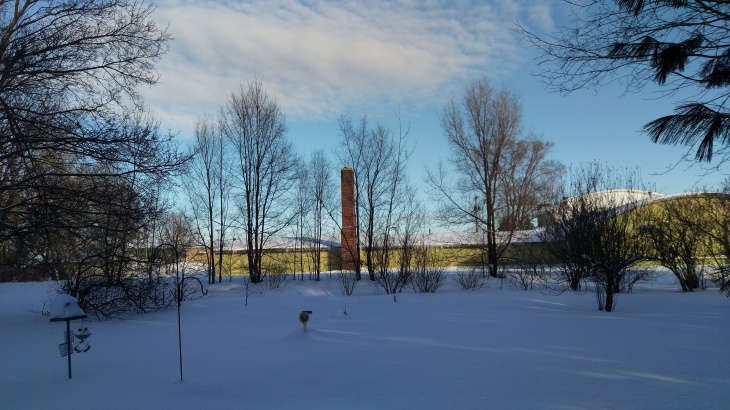 Ben and I have both gotten some writing in today too.  It feels good to be writing again.  It isn’t as often as I used to, especially before Grad School, but I’m slowly working my way back into it.  Writing is hard.  It takes work like so many other things in life.  It changes you and changes the way you see the world around you.  Your characters become a part of you, a part of how you see the world.  For me at least, writing stays with me.  Sometimes I find myself quoting lines from stories and then suddenly realize it isn’t only from something I’ve read, it is from something I’ve written.

Of course, not all writing is fiction and not all writing has characters.  In my experience though, even that writing changes you.  There is a poem I wrote about trees that I think about whenever I see the trees blowing in the wind.  There is a fictional story I wrote about a real place, and my mind goes back to that place every time I read that story.  I tried to make it as real to the reader as it is to me.

It’s days like today when I’m so thankful I married a fellow writer.  We can talk for hours about our writing and it never gets old.  Writing is both a way to get your voice heard among the shouts of so many, and to get your ideas out.  Writing lets us create worlds we’ve never seen.

I can’t tell the future, so I don’t know if an editor will pick up either of our works one day, but I know we’ve both been published in Newspapers and I have my blogs.  It’s not the ultimate goal, but it works for now.  There is self-publishing too, if we decide to go that route.  I have a ways to go with my work anyways before it is anywhere near ready to be published.  When the time goes, I’m planning to aim to go through an agent first though.  No matter how small the odds, I have faith that one day we’ll get there.  Both of us.  After all, even Northern Michigan sees a little sunshine some days.